The more things change the more they stay the same.

With many of the Democratic presidential candidates' flirtation with Medicare for all, the topic is once again front and center going into the 2020 presidential campaign.

Just like it was when Jimmy Carter ran on a Medicare for all platform in 1976––and it turned out there weren't the votes for it in 1977 even though Carter had a filibuster-proof 61 Democrats in the Senate and a whopping 292 Democratic House seats. In fact, Carter failed to move any significant health care legislation.

In 1993, the Clintons didn't even try to move a single-payer plan even though the Democrats controlled 57 Senate seats and 258 House seats because only about half of the House Democrats favored a single-payer system.

The same for 2009 when both Hillary Clinton and Barack Obama ran on health care platforms during the primaries that looked a lot like the eventual Obamacare because again only about half of the House Democratic caucus favored a single-payer program.

Now in 2019 we are in the very same place we were in 1977, 1993, and 2009––only about half (118 as of September 6th) of the House Democratic caucus now supports the Medicare for all proposal introduced by Progressive Caucus Chair Pramila Jayapal (D-WA).

A coalition of 101 more moderate House "New Democrats" has called for "the committees of jurisdiction to prioritize strengthening the Affordable Care Act and continue the path toward universal coverage," as their first priority.

Early in this Democratic presidential primary campaign, the vast majority of the front-runners said they were for Medicare for all, but most have since backtracked to something that amounts to fixing Obamacare "on a path to Medicare for all."

Only Bernie Sanders and Elizabeth Warren have remained consistent in their support.

Maybe most telling, Democratic House Speaker Nancy Pelosi recently said, "God bless the 2020 Democratic presidential candidates putting forth Medicare for all proposals, but know what that entails. I believe the path to 'health care for all' is a path following the lead of the Affordable Care Act. Let's use our energy to have health care for all Americans — and that involves over 150 million families that have it through the private sector."

Much of the Democratic backtracking came in response to lobbying by the core Democratic constituency of organized labor when labor leaders pointed out to the candidates that the primary business of labor unions is now negotiating the maintenance of rich union plans––it wouldn't be just the insurance companies that single-payer health care would put out of business.

With the Democrats realistically focused on just keeping their existing majorities in the 2020 elections, by protecting many of the 2018 gains built in districts that had long been Republican, or at best expanding their majorities slightly, I see no reason why we will be in a different place in 2020––even if Sanders or Warren win the White House and make Medicare for all an early priority.

Yet, Wall Street takes the notion of a single-payer health care plan seriously.

Health care stocks generally, and health insurance companies specifically, have seen their values plummet amid all of the Democratic primary rhetoric. The HMO-heavy iShares U.S. Health Care Providers ETF has plummeted 15% in the last year even as health care industry profits have remained solid: 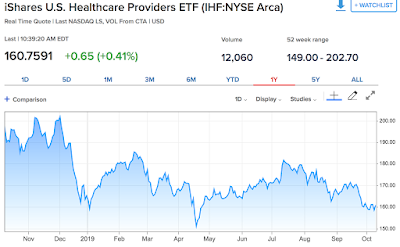 Not even the Washington Post sees a Medicare for all plan even remotely possible.

On the wildly unrealistic side is Mr. Sanders’s plan, which Sen. Elizabeth Warren (Mass.) also supports. Mr. Sanders would eliminate private insurance and enroll everyone in a government-run plan that is, in fact, far more generous than Medicare. Even if Americans wanted to give up their private insurance, Mr. Sanders’s plan to eliminate premiums, co-payments and other cost-sharing, while offering Americans a massive suite of free benefits, would either be unimaginably expensive or force unsustainably huge cuts in payments to doctors and hospitals. Mr. Sanders points to other countries with “single-payer” systems to prove that building one in the United States is possible. In fact, other nations are far less generous than what Mr. Sanders proposes.

Posted by ROBERT LASZEWSKI at 11:19 AM