You are probably thinking that question is, How are you going to pay for it?

But, I will suggest there is another critically important issue that is part of the overall question about how it will be paid for––What will your plan do to our existing health care system?

Advocates argue their single-payer Medicare for all health care system will overall cost us all a lot less. They are right that their systems can be a lot less expensive by expanding Medicare to everyone––primarily because government payment rates are so much smaller.

But here's the hitch––paying Medicare rates on behalf of all patients would literally bankrupt the system we have.

The American health care system has evolved to painting itself into an extraordinary corner. Over the years politicians have been able to cut Medicare and Medicaid provider reimbursement rates, even below the providers cost to offer those services, because health care providers can make it up by charging commercial insurance more.

If a single-payer Medicare for all scheme were to suddenly make the Medicare and Medicaid reimbursement rates the only rate providers were paid, the whole system would simply go "tilt."

Understanding just how any presidential candidate's Medicare for all health care plan intends to deal with this conundrum is critically important. 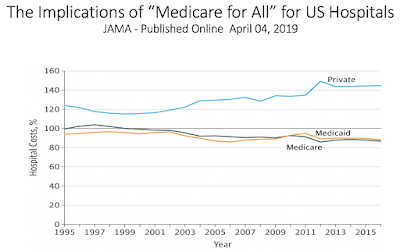 Physicians would suffer an average 22% pay cut with some specialties getting reduced dramatically more: 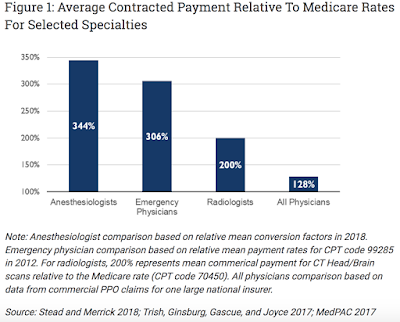 According to the Census Bureau, in 2016:
Most of the remainder of the population was uninsured or in the separate VA system.

So, in 2016, 121 million people got their care under Medicaid and Medicare and their providers were reimbursed at those rates.

Another 177 million people were in the commercial insurance market and had their care reimbursed at the much higher commercial rates.

The term "Medicare for all" is an enticing concept––give everyone universal health care with little in the way of deductibles and co-pays, lower premiums, and even new benefits like nursing home care.

Is this even financially possible?

It is. So long as you cut hospital and doctor reimbursement to Medicare levels.

Is this what Bernie Sanders and Elizabeth Warren intend to do in order to balance the books in their Medicare for all scheme?

Warren has not offered any kind of plan––just vague promises about universal coverage in a system that will overall cost us less.

Sanders has been more specific listing a set of tax choices to pick from while avoiding the question of just exactly what he intends to do about provider reimbursement.

Much of what we've asked the 2020 Democratic presidential candidates about their health care plan is over whether they intend to raise people's taxes to pay for it.

And, just how much do they intend to cut provider reimbursement and what will that do to our existing health care system?

We don't know the answers to these questions because the leading Medicare for all advocates, Sanders and Warren, have not told us how they intend to pay for all of these promises.

Voters should not take them seriously on the issue of health care until they give us the details for how they will balance the books.

Posted by ROBERT LASZEWSKI at 11:17 AM