The Debt Ceiling Debate—Some of These People Are Nuts

I don’t know about you but the politicians are starting to scare me with their inability to make progress in the federal debt limit discussions. Worse, is the apparent eagerness of some to actually take the government to default to make a political point.

I know a lot of conservatives say missing the August 2 deadline isn’t a big deal but I think it is.

That means that 40 cents of every dollar the U.S. government spends in 2011 has to be borrowed!

We have hit the $14 trillion cap on federal borrowing. If it isn’t raised by about August 2, the federal government can’t borrow anymore and it will have only 60% of the money it needs to continue to function.

Most of the press reports have put the failure to be able to borrow more in the context of not being able to redeem the debt coming due and spooking the financial markets. That is a big deal.

But another big deal here is that the Treasury would have only 60% of the money it needs to pay the bills. This isn’t simply a matter of paying higher interest to rollover old debt--the feds couldn't issue the new debt they would need for the current month's deficit. Without raising the debt limit, the government would not be able to borrow the money it needs to fund the monthly budget shortfall of about $133 billion—40 cents of every dollar it needs to spend in 2011.

The good news is that the 60 cents on the dollar the federal government would have from its revenue stream could pay for things like Social Security benefits and keep funding the troops in the field.

But, who wouldn’t get paid because the federal government would have to immediately cut the budget by 40%? Might the government suspend payments to hospitals and doctors and to Medicare Advantage insurers?

In an instant, federal spending would decrease by 40%--leaving lots of bills unpaid. In turn, those who didn’t get paid couldn’t pay their bills. This would cascade through the economy like an economic tsunami in short order. Can you imagine the impact on a hospital that gets half of its revenue from Medicare and Medicaid if its government payments were frozen? Or, the impact on a health plan that is heavily invested in the Medicare Advantage business? A health plan could become technically insolvent and under state control in a matter of a few weeks.

There are lots of people in Washington that seem to be either eager to make a political point at the real risk of precipitating an incredible financial crisis or they are playing a very cynical game of chicken.

People wouldn't be so foolish to let this get to such a place? Hey, the Dodgers declared bankruptcy today!
Posted by ROBERT LASZEWSKI at 5:18 PM 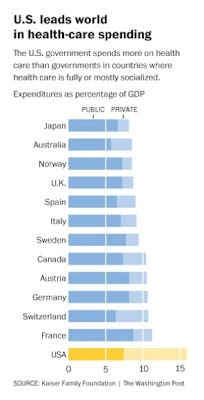 I call your attention to Ezra Klein’s column in the Washington Post this morning.

In it he cites data that has been out there for a long time but Ezra puts some perspective on it that never occurred to me before.

Examining the Kaiser Family Foundation brief, “Health Care Spending in the United States and Selected OECD Countries” he points out, “Our government spends more [as a percentage of GDP] on health care than the governments of Japan, Australia, Norway, the United Kingdom, Spain, Italy, Canada, or Switzerland.”

The data would seem to indicate that even our single payer government-run American health care programs, Medicare and Medicaid, cost way more than similar health plans in these nations.

The argument is often made that we should adopt a single payer—or perhaps a “public option”—health plan in the United States in order to control costs and cover everyone. But it would appear that even those programs in America are way too expensive when compared to similar programs in other industrialized nations.

As for the Republican market-based approach, Klein also points out that those programs have been ineffective at cost control. House Republican Paul Ryan often cites the Medicare Part D drug benefit as proof his proposals to privatize Medicare would work better than what we have. But as Klein points out, Part D premiums have risen 57% since 2006 and the program is on track to see nearly 10% growth in annual costs over the next decade.

My takeaway from all of this is that neither side has the answer to bringing America’s health care costs under control.

Liberals think that a single payer, or at least a “public option,” is the best hope and point to Europe and Canada as proof of that. But, as a percentage of GDP, the cost of our already government run health care plans rivals many of those nations' entire government spending on health care.

Painless solutions might be politically attractive, but the data indicates they will not get the job done.

Recent post: What It Will Take to Bring America’s Health Care Costs Under Control––We Have to Change the Game
Posted by ROBERT LASZEWSKI at 9:30 AM