In a prior post, I argued that the Biden health plan directly takes on the most problematic parts of Obamacare by making individual market coverage affordable––and would therefore make the individual insurance system much lower in cost and therefore financially sustainable.

A lower cost individual market would also make the entire private insurance market more politically sustainable––if people find their coverage affordable why move to a complete government takeover such as Medicare for all?

As part of his plan, Biden also calls for a "public option."
He defines his public option as being something like Medicare by "negotiating lower prices from hospitals and other health care providers." Today, Medicare pays close to half the price commercial insurers pay hospitals and pays about 20% less than commercial insurance pays doctors––and often much less than that for certain specialties.

That is a problem for insurers. How would you like to run a business and have the government show up with a competing product and use its unilateral power to pay the suppliers you both need half as much as you do?

This is a problem for health care providers. Health care providers today operate in a dual American system. They get paid a lot less by the government for Medicare and Medicaid patients, but get to charge a huge private market a lot more, thereby getting enough in overall payments to make the system work for everybody.

Biden would also give everyone in the private market, including those in employer-based insurance, the ability to opt-out to what could be a much cheaper insurance system based on those much lower provider payments. That not only threatens the private insurers but it has the potential to upend the fragile payment balance providers have struck if more and more reimbursement comes to them at the lower Medicare rates.

This is also a problem for employers. Biden's letting workers opt for the government plan could lead to declining enrollment in employer plans and hard to predict impacts on their remaining long-term costs as well as their ability to attract the best part of the workforce with their benefit packages.

Employers continue to be suspicious of any government take-over of the health care system worried that they could lose control of what they pay for health care––with politicians only too willing to hand employers the bill for their new health care schemes.

But IF Democrats come out of the 2020 elections with the White House and working majorities in the House and Senate, they are not likely to be satisfied with incremental change to Obamacare without a public option––particularly if many in the Democratic base have to abandon hopes of passing a Medicare for all plan (see my post on why a single-payer plan is highly unlikely).

In the face of that political freight train, could insurers and providers be willing to accept a public option?

None of them will even come close to agreeing to that so soon in the process.

While Biden has called for making the public option available to everyone in the private market, including those in employer-based insurance, concentrated opposition from insurers, providers, and employers would likely scuttle that idea.

But what about just making the public option available to the much smaller individual health insurance market?

While the health care market would be very leery of letting Democrats expand government health care to any segment of the market for fear it is just the beginning, I would argue they won't have much choice if the Democrats sweep the 2020 elections. Democrats generally regret they didn't pass the public option in 2010 and they aren't about to make that "mistake" again.

I would also argue that the health insurance industry and health care providers shouldn't see passage of the public option as the end of the world. 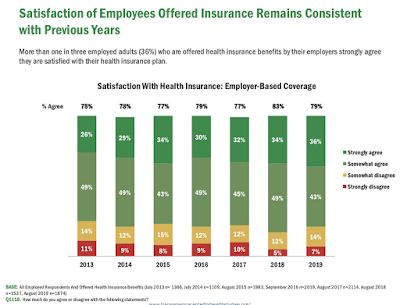 In fact, passage of the public option could well ensure that the rest of the private insurance market continues for decades to come:
Insurers and providers can easily become worried the public option would just be the beginning of the entire health care market being taken over by the government.

But, if consumer frustration with the current individual market mess comes off the table, just what is the political imperative for the American people, long suspicious of more government involvement, to demand their employer-based care and their Medicare Advantage and Supplement plans be traded for a single government-run system?

Rather than the public option being the beginning of the end of the private health insurance system, it could well be the equivalent of the firefighters' controlled burn––by taking away what is by far the most politically combustible material fueling any progress toward Medicare for all.

I will suggest this analysis applies even if a Democrat other than Biden wins the nomination––this is essentially where even Warren and Sanders would have to settle once it became clear to them that Medicare for all wasn't going anywhere so long as only 27% of the House of Representatives supports it.

Of course, this analysis only has relevance if the Democrats win the White House and achieve working majorities in the Congress.

And, if the Republicans hold on in the 2020 elections? Well, that is another story.

Posted by ROBERT LASZEWSKI at 9:39 AM