Is the Drug Industry an Existential Threat to the Private Health Insurance Business?

At a time when many Democrats are calling for a single-payer health insurance system, are the drug companies inadvertently driving the system on a course to that end?


The longtime political firewall against a single-payer system has been the satisfaction consumers have had with their employer-sponsored health insurance. Most voters have had no interest in giving up their affordable and attractive employer health benefits for the uncertainty of a one-size-fits-all government-run plan.

Employer-sponsored health insurance covers 140 million people—by far the largest part of the under-age-65 health insurance system. Most of these people are in the politically all-important middle class.

But in recent years, the employer share of premiums and out-of-pocket costs has been exploding (Willis Towers Watson, November 2018): 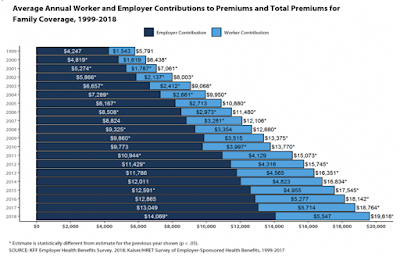 Driving these costs has been pharmacy.

I recently polled a number of my clients on their historic and current drug spend.
To me there is an inescapable set of conclusions here:
Voters, Donald Trump, the Democrats, and the Republicans have all cited drug costs as a huge economic issue that has to be brought under control.

But for the private health insurance industry, it could be the one major factor that does them in if a solution isn’t found.

I can’t see a more important issue for the health insurance industry than the unfettered ability of drug companies to unilaterally dictate prices.
Posted by ROBERT LASZEWSKI at 9:36 PM