The Congressional Budget Office (CBO) has estimated that 14 million of people would lose coverage in 2018, 21 million in 2020, and 24 million in 2026 if the House Republican plan is allowed to significantly amend the Affordable Health Care Act (Obamacare).

In my last post, I called the House Republican bill "mind boggling" for the negative impact I believe it would have on the number of those uninsured and the viability of the individual insurance market. Guess the CBO agrees with me.

Republicans are jumping on the CBO estimate reminding us that the CBO’s Obamacare projections haven’t been perfect in the past.

This is not the issue.

What Republicans are proposing, and how those proposals will impact how many people have insurance in this country, is the issue.
The House Republican bill is not a clean replacement of Obamacare. It is an amendment to it.

So, it is fair to take the number of people covered today under Obamacare and look at the impact each of the Republican changes will have.

The House Republican plan would either spend more money or take away certain sources of funding:
But, the CBO estimates the Republican plan would spend $337 billion less on their amended program than Obamacare would have spent. So, with middle class subsidies up, with big new payments for consumers, insurers, and hospitals, and big tax cuts for a whole list of stakeholders, including for those making over $200,000, something has to give.

The Republicans offset these expenditures and tax cuts by doing at least three things: 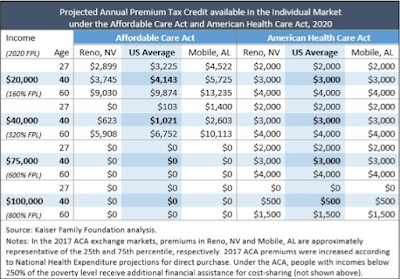 It is not at all likely the House Republican proposal will provide cheaper plans:
I have long argued that if we could get more like 75% of those potentially eligible into the risk pool, it is only about 40% under Obamacare, premiums could come down 30% to 40%. The problem with this Republican proposal is that while the better middle class subsidies would likely improve participation among this group, the combination of worse low-income subsidies and the paltry late enrollment penalty would likely make the existing pool worse. There is little likelihood that these changes will, on a net basis, materially improve the overall risk pool's viability and therefore bring premiums down.

Health plans would be able to offer skimpier plans. The Republican claim that many could buy a catastrophic plan for the cost of their flat age-based tax credit is likely credible.

This weekend, HHS Secretary Price said, “I firmly believe that nobody will be worse off financially in the process that we’re going through, understanding that they’ll have choices that they can select the kind of coverage that they want for themselves and for their family, not [that] the government forces them to buy. So there’s cost that needs to come down, and we believe we’re going to be able to do that through this system. There's coverage that’s going to go up.”

The CBO didn’t agree with the Secretary. And, neither can I.

Obamacare was a massive transfer of wealth from the better off to those with low incomes––and was very unpopular among the middle class because of that. The House Republican plan is just shifting much of that from the Democratic base back to the Republican base. If it becomes law, we'll just have a different group of people upset.

It would be nice if we could have a health insurance reform plan a consensus of the people could appreciate.

Sounds like the Republicans––according to the CBO––will have $337 billion to make things better. And, they should.

Posted by ROBERT LASZEWSKI at 4:24 PM