The Republicans don't yet have a health care plan less than a year before the 2020 elections.

House Republicans would have repealed the Medicaid expansion and the individual market subsidies and would have repackaged them into a program that took some, but not all, of that money and sent it to the states. Each state legislature would have then taken that money and crafted a health insurance plan of their own making.

Here is the Congressional Budget Office's (CBO's) July 2017 evaluation of that plan. The CBO calculated the Republican House plan would have spent $1.3 trillion less than Obamacare over ten years on Medicaid and insurance subsidies: 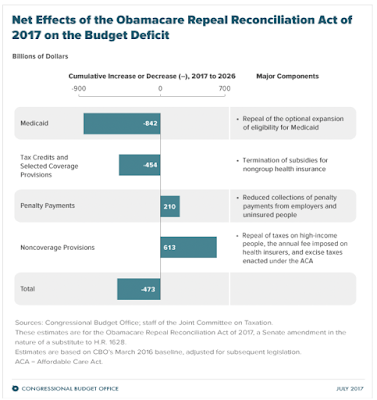 The CBO estimated that these funding cuts would have led to:
Obamacare has suffered because a relatively small number of subsidy eligible ever signed up for the program––about 40% at its high point. That in turn has led to very high premiums with an insufficient number of healthy people participating to pay for the costs of the sick.

The 2017 House Republican plan's combination of dumping more people into the pool by shrinking Medicaid––and therefore increasing the number of people eligible for individual coverage––and cutting the subsidies in the private market, could only have had the result of making the percentage of eligible people buying a private health plan even worse. That in turn could only lead to even worse individual market affordability and resulting underwriting anti-selection than what we have had under Obamacare.

Republicans saw moving the design and administration of health insurance reform to the states as an opportunity to administer the program at a more efficient and place that would also have given the states the ability to innovate. Critics only saw the potential for states to go backward on Obamacare's key market reforms, including pre-existing coverage guarantees and financial support.

While this plan passed the House, it never attracted a simple majority in the Republican controlled Senate.

Since the Republican Senate's inability to advance any kind of Obamacare repeal and replace bill, Republicans have not put forward any other comprehensive health insurance reform bill.

The RSC's document follows the broad outline of the failed 2017 House plan––taking the existing Medicaid and individual market subsidies and repackaging them into state block grants where fifty new health insurance reform plans would be created and administered.

This time, the Republican plan spends more effort to assure consumers that their pre-existing medical conditions would be covered, "Consequently, everyone with an existing condition who is seeking coverage in the individual market would be provided a pathway to obtaining complete coverage of all their medical conditions within just 12 months."––albeit in a system that could vary greatly from one state to another and has the potential to delay coverage for a pre-existing condition for up to a year.

The RSC outline is also vague on whether current Medicaid expansion and individual market subsidy expenditures would be cut prior to sending the money to the states in the form of block grants, saying only that "Funding for these grants would be derived from repackaging the ACAs premium subsidies and Medicaid expansion funding."

In fact, the outline contains no spending or revenue projections.

Taken directly from the RSC document, here are the key points:

The RSC plan also assumes that taking this very controversial and complex health insurance reform challenge and simply delegating it to fifty state legislatures, who will then be expected to come up with fifty different decisions on how to proceed that they argue will all be better, is a risk voters will want to take.

While this RSC plan tries to directly deal with the concerns people had with the original House plan over pre-existing condition reforms, it still creates the potential for many states to offer reforms that would likely be less than the seamless pre-existing protections people have today.

Democrats will argue that it would be better to take the baseline that Obamacare offers and improve what is broken––particularly the insufficient middle class subsidies––than to take the risk of wiping Obamacare off the map and taking our chances in 50 state legislatures.

My sense is that Republicans will have a huge uphill fight to win that argument––even if Republicans keep the White House, hold the Senate, and retake the House next November.

The irony is that Obamacare was built on a Republican policy chassis––the 1989 original Heritage Foundation proposal that was later adopted by the Democrats and morphed into the problematic Obamacare we have today.

Republicans just have a huge hatred for anything labeled "Obamacare" and still appear unwilling to take that platform and overhaul it based upon Republican principles.

It is hard to see how Republicans will be the ones to drive health insurance reform until they are willing to do that.

Posted by ROBERT LASZEWSKI at 11:11 AM