Shouldn't any gain from repealing the Republican tax cuts on the wealthiest go toward fixing the debt and deficit problems these tax cuts have contributed to?


Democratic presidential candidates Joe Biden and Pete Buttigieg both rely on repealing some of the Trump tax cuts––particularly those for the "rich"––to pay for their very similar and incremental health care plans that rely upon making a government-run public option available to consumers.

On one level that notion can be attractive to Democratic voters turned off by the 2017 Republican tax cuts.

But when those tax cuts were passed, the Congressional Budget Office (CBO) estimated those cuts would add $1.6 trillion over ten years to the deficit. The Democrats were apoplectic over the Republican irresponsibility of it all.
Two years later, Republicans can argue the economic expansion continues at record rates and their tax cuts are a big part of making that happen.

But one thing no one can argue with is that two years into the cuts we are seeing an explosion in federal government deficits and a resulting increase in the national debt.

This from the November 2019 Congressional Budget Office (CBO) Budget and Economic Outlook: 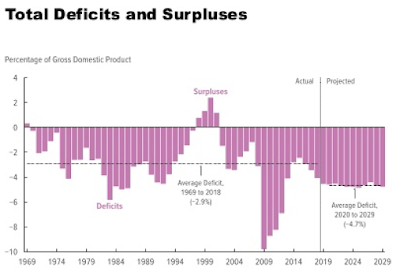 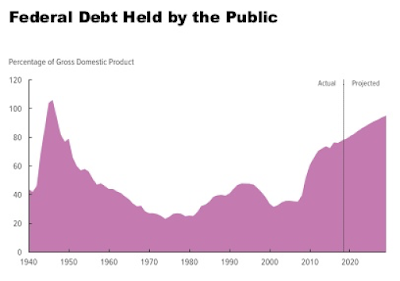 So, what would these Democrats do with the money from repealing the Trump tax cuts that have "benefited the rich?" Are they calling for using the reclaimed revenue to reduce deficits and debt?

No, they use that money to pay for their health care proposals.

Here is how Biden and Buttigieg would pay for their health care promises:

The other two leading Democratic presidential candidates, Elizabeth Warren and Bernie Sanders, have far more ambitious and far more expensive Medicare for all plans. And, their plans to pay for those proposals, by necessity, go way beyond just repealing the Trump tax cuts.

Here is a list of Warren's Medicare for all health care pay-fors: 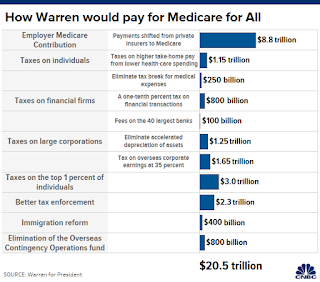 Warren has more recently backed away from Medicare for all saying she would first implement the public option that both Biden and Buttigieg have called for––but she has not said how she would pay for her first stage incremental plan.

Sanders has no specific list of health care pay-fors. Instead he only provides a menu of possible, and sometimes vague, things to choose from:

Biden and Buttigieg's very similar health care plans are more modest and incremental. As a result, their plans to pay for them are more modest––focusing on using repeal of the Trump tax cuts "for the rich" as a major part of their pay-for plan.

The problem is those Republican tax cuts have already been a major factor in our accelerating deficits and national debt. Shouldn't the first priority be to use any repeal to repair the national fisc?

Or, do the Democrats just have a different set of spending priorities for the intolerable amount of red ink we continue to roll-up?