I will be happy to have the Obama Administration do these status reports anytime they would like to takeover from me.

If I were in the White House spinning, I could report to you that enrollment in states run by the federal exchanges jumped 50% in the last few days.

Health plans that might have told me last week that they had enrolled 400 people since October 1 are now telling me they had a "surge" in enrollment in recent days and are up to 600 people. I guess that takes us up to a trickle and a half.

So, on a net basis, no material change after the federal exchange's weekend shutdown.

This all led me to have a scary thought. What if the administration fixes the front end of this thing (people signing up) before they fix the back end of the system? That could mean an overwhelming number of enrollments coming through to health plans before they could possibly be handled (Memo to CMS: Take note).

An Associated Press (AP) story over the weekend cited Obama administration claims that 476,000 "applications" have been filed in both the state and federal exchanges. The administration said just over half of these––presumably 250,000––came from the federally run exchanges in 36 states.

However, as the AP article reported, the administration's definition of "applications," as well as that in some states like California and New York, is for people who have only started the shopping process by signing up at the federal website and inquiring about what their subsidy is. That number is not the number of people who have actually gone on to buy insurance.

Give me a break.

The feds, and most of the states including California and New York, continue to refuse to say how many people have actually bought a health insurance policy since enrollment began on October 1.

But the administration did also say this weekend that more than 19 million unique visitors have come to the federal website since it launched.

So, here is what they have told us: Of the 19 million people who have tried to get onto the federal health insurance website, 250,000 have been able to set up an account. Certainly not all of those who visited intended to buy insurance but that is just over 1% of visitors. Now that is the bottleneck of all information technology bottlenecks!

When I want to get a quick summary of just how the states are doing, I look at Dan Diamond's posts on the Advisory Board Blog. With his permission, here is his latest data: 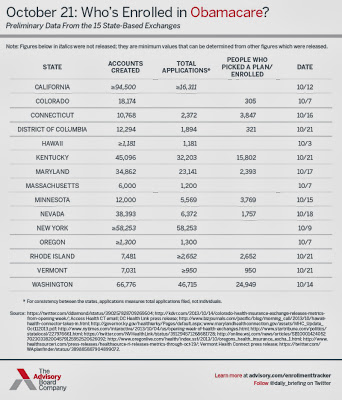 Washington state and Kentucky may well be giving us an idea of just how many people would be enrolling if the many dysfunctional state and federal exchanges had largely been working as expected.

Yes, they did have glitches. But the difference is that their glitches were glitches.

Posted by ROBERT LASZEWSKI at 11:53 PM