Yesterday, the President said in Boston that the millions of people who are getting cancellation letters ending their coverage in the individual health insurance market are being saved from "substandard plans" that were sold to them by "bad apple insurers."

I guess these would be the same insurers his staff invited to the White House last week. In their statement following that meeting, the White House said they were "committed to working in partnership with the insurers" toward implementation of the Affordable Care Act.

So, this is how he treats his "partners."

Are health insurance plans in the individual market substandard?

Not the overwhelming bulk of them.

How do I know that?
Because individual health insurance policies have been regulated for decades by the states. Every policy sold in a state has to be approved by that state's insurance commissioner. Have you heard about the longstanding debate over whether or not states over regulate this market with too many state health insurance coverage mandates and policy requirements?

This whole issue over whether the states regulate these policies too much has been at the heart of Republican calls for insurers to be able sell individual health insurance plans across state lines––to be able to buy individual health plans from states with fewer regulations.

In this context, it is kind of hard to argue that this is a "substandard" insurance market.

How many health insurance mandates are there and what kinds of mandates exist?

Here are some charts from a 2011 report issued by the Council For Affordable Health Insurance––an advocacy group formed in great part in opposition to the large number of state health insurance mandates that already exist. This market is so regulated there is actually an advocacy group to fight it! 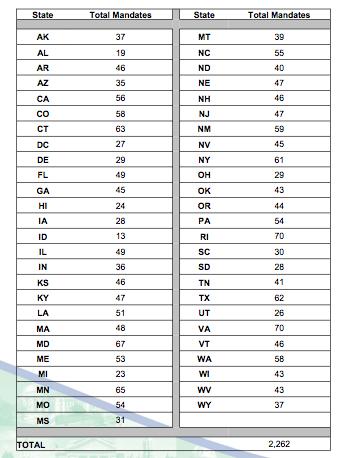 Given the President's comments, you really have to wonder just how well the Obama administration understands how the health insurance markets work?

Posted by ROBERT LASZEWSKI at 11:58 AM