So If the Maryland Health Insurance Rates Are So Cheap Why Did I Get This Postcard From Maryland Blue Cross?

That's what I wondered when I got this postcard; presumably sent to lots of people who live in Maryland: 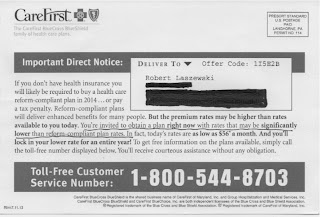 In it, (click on card to enlarge) Maryland Blue Cross is telling me that; "I am invited to obtain a [health] plan right now with rates that may be significantly lower than reform-compliant plans [their emphasis]."

Are they suggesting there is rate shock coming?

I was surprised to get this card because the Maryland Health Insurance Exchange recently issued a report that said they would have among the lowest health insurance rates in the country once "Obamacare" goes live on October 1:


For the scenarios evaluated, Maryland’s approved rates are among the lowest of the 12 states that have proposed or approved rates available for comparison. For example, for a 50-year-old resident, New York has approved a Silver plan at a rate of $319 per month. For a 50-year-old resident, Maryland has approved a Silver plan that costs as much as 18% less (from $260 to $269 a month, depending on the region).

Among Bronze plans compared for young adults, Maryland rates were lower than those proposed or approved in all other eight states for which a comparison was possible. For example, the lowest price for a Bronze plan for a 25-year-old in Maryland was $114, compared to $134 in Virginia, $146 in Colorado, $163 in Ohio, $167 in Washington State, and $174 in California.

Among Silver plans for middle-aged adults, Maryland rates were lower than those proposed or approved in all other states except New Mexico. For example, the lowest price for a Silver plan for a 50-year-old in Maryland is $260, compared to $319 in New York, $329 in Virginia, $343 in Colorado, $374 in Ohio, $376 in California, $392 in Washington State, and $400 in Rhode Island.

But what is often happening here is that these lowest cost and second lowest cost plans are likely the most limited access plans available.

For example, Wellpoint is the only insurer offering a plan on the New Hampshire exchange. That plan offers only 14 of the 26 state hospitals and only 65% of the docs in their wider networks.

A McKinsey analysis of 13 state exchange plans found 47% were HMO plans––last year only 5% of the individual market sales on eHealthinsurance.com were HMO products.

In California, Blue Shield is offering only one exchange plan, a narrow network plan that includes only 36% of their contracted docs and is notable for not including the most highly regarded hospitals in the state.

The lowest cost California plan comes from insurer Health Net. The LA Times is reporting that Health Net is offering, "less than half [the number of providers] some other companies are offering in Southern California." The Times reports that Health Net is limiting its network to one-third its usual employer network. In San Diego, the company will only have 204 primary care physicians in its provider network.

"We are nervous about these narrow networks," Donald Crane, CEO of the California Association of Physician Groups was quoted by the Times. "It was all about price. But at what cost in terms of quality and access? Is this contrary to the purpose of the Affordable Care Act?"

Dr. Crane, this is certainly contrary to the claims health insurance exchanges like California are making declaring victory over rate shock.

What many health plans have done is to put their lowest cost plans on the exchanges and have often built new very narrow network plans just for the exchange. Some of these lower cost plans are being offered by Medicaid contractors moving into the commercial market for the first time. The thought is that many of the people coming onto the exchange will be low income people coming from the ranks of the uninsured where even the narrowest network plan will be a huge improvement.

What is also happening is that health plans are expecting that higher income people will not be eligible for a subsidy and will come directly to the health plan for the better coverage when it isn't available on the state exchange.

My sense is that is what this post card is alluding to. Yes, there are very cheap rates on the Maryland exchange. But if you want the better plans, you had better come to us directly and buy now and avoid the "significant" rate increases the wider network plans will be subject to as they begin to comply with the new law.

The exchanges bragging that they have reduced the cost of insurance, and citing these low cost plans as examples, is tantamount to opening a new car dealership and just cherry picking the cheapest compact cars available and then claiming you've found a magic way of cutting the cost of car ownership!

I will suggest that a Buyer Beware warning is in order here.

In the past, health insurance companies could develop lower rates by underwriting and wide variations in plan design. But with the new health law they can no longer underwrite and they are very limited on what they can do for plan design––all plans must fit into the actuarially tight Bronze, Silver, Gold, and Platinum benefit boxes.

What rate reduction tools are left to them? Restricting which health care providers consumers can use and the terms under which they can access them––setting up a tight referral system before being able to see a specialist, for example.

These are fair and appropriate ways to differentiate health insurance products and control costs. And, creating safety-net style health plans for lower-income consumers to put on the exchange is a good idea.

But buyers need to be very careful in looking past the lower rates by being sure they understand just what they are buying.

And, they should also understand that the federal subsidies are tied to the second lowest cost Silver plan. By creating these new narrow network plans, insurers have capped the federal subsidy people will be eligible for in each market. If you want a wide access plan, if it is available on the exchange, the consumer is going to have to pay that difference out of their pocket.

Some will argue that even with the narrower networks we all need to concede that the new state health insurance exchanges are providing attractive and affordable health insurance products for lower income people.

I will address that argument in my next post.
Posted by ROBERT LASZEWSKI at 5:38 PM