Benefit Shock? Consumers Will Be Surrpised By What They Find on the New "Obamacare" Health Insurance Exchanges

Will we have rate shock?

It looks to me like consumers will have a choice when they get to look at the health plans available on the new "Obamacare" health insurance exchanges––rate shock or benefit shock.

While there has been lots of focus on the issue of rate shock, I will suggest that just as big an issue may well be benefit shock—that consumers will look at what they will be getting for their premium payments and that they will be surprised at what their out-of-pocket costs will be and before they get anything.

The following chart was prepared by Covered California, the state-run California exchange. This chart does not include specific California plan premiums. What it does show is the net of subsidy cost a single person would pay at the various income points for the second lowest cost Silver plan, as well as the deductibles and co-pays they can expect to see from the standard Silver plan.

While the benefit plan structures may vary a bit from state to state, this gives us a pretty good idea of what consumers can expect in all of the states (click on chart to enlarge). 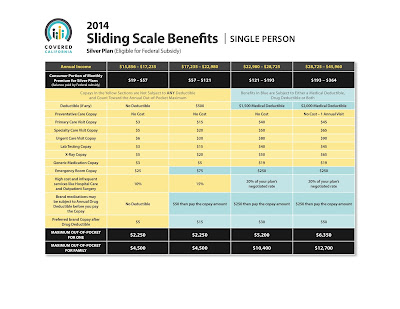 However, the point most people have been missing is that same person would also face a $500 deductible and up to $2,250 in out-of-pocket costs for things like co-pays. If the individual were sick, that looks like a pretty good deal. If they were healthy, would they spend what is perhaps 10% of their monthly take home income for a plan with an upfront $500 deductible?

Now, as insurance—paying for unexpected and unaffordable medical costs—this is a pretty good deal. But American consumers have come to see health insurance as something more than pure insurance, having been spoiled by first dollar coverage over the years.

I have to think that many healthy low income people are going to have some issues when they come to understand how little short-term gain they are going to get for an expenditure of about 10% of their take home pay. I will suggest that this is an issue that many ardent supporters of “Obamacare” have missed.

For so many individuals and families, 10% of their take home income is a huge issue. This is the marginal income left at the end of the month, after taxes, rent, and car payments that is so critically important to them. As purely an insurance value, it’s a good deal. But the notion that hard earned and important dollars would be spent for something they aren’t going to get any measureable short-term value for is another matter entirely.

Unless, of course, you are sick and you can “make money” in the short-term by buying the insurance.

From the beginning I have been concerned that the “Obamacare” subsidies aren’t enough to assure us that we will attract a good cross section of healthy people to offset the costs of the sick.

At the beginning of this debate, the late Senator Ted Kennedy (D-MA) presented a plan that did have much more attractive subsidies for lower-income people. That plan would have cost about $2 trillion over ten years—something that was not considered affordable at a time we were in the midst of the Great Recession. The political decision was ultimately made to come up with a plan that cost under $1 trillion dollars and that the Congressional Budget Office could score as fully paid for. That meant cutting the subsidies in order to make the goal—a solution at the time that may now have become the problem.

This chart represents the cost and benefits a single person would get. The challenge for families—particularly middle class families—will be even more difficult.

Add to that another sleeper issue in “Obamacare”—the subsidies are tied to the second-lowest cost Silver plan. If you buy a plan that costs more, the incremental cost is not subsidized.

In California, for example, the Blue Shield exchange offering is limited to 24,000 doctors compared to the standard Blue Shield network that covers 64,000 docs.

The lowest cost California plan comes from insurer Health Net. The LA Times is reporting that Health Net is offering, "less than half what some other companies are offering in Southern California." The Times reports that Health Net is limiting its network to one-third its usual employer network. In San Diego, the company will only have 204 primary care physicians in its network.

In New Hampshire, the sole health plan offered on the exchange is a Wellpoint plan, which will cover only 14 of 26 state hospitals and 65% of the normal physician network.

Just what that second-lowest cost Silver plan costs will determine the subsidy people get for any other plan they really want and, therefore, how they perceive the value of the program. If they want they kind of traditional provider access plan most middle class people have become accustomed to, they will have to pay more for that plan out of their pockets.

A recent McKinsey analysis of 955 exchange plans found that 47% were HMOs that offer limited networks. By comparison, the current individual market is accustomed to wider provider choice—just 5% of sales in eHealthinsurance.com were for HMO coverage in 2012.

In state after state, the large national carriers like Aetna, Humana, and UnitedHealthcare have either pulled out of exchanges or never offered coverage in the first place. The administration has touted the number of plans available in most markets but failed to mention that some of the most effective competitors are often not in the exchange having been replaced by a brand new co-op plan or a Medicaid insurer now expanding into the commercial market.

Time after time in the exchanges, that second-lowest cost Silver plan is not going to look like “your father’s” health insurance.

Consumers will be faced with a dilemma––accept these lower benefits and limited provider networks for the lower prices (benefit shock) or buy a more expensive plan and pay the difference out of pocket (rate shock).

But, consumers will have to face the individual mandate penalty for not purchasing health insurance if they pass on it.

Or, will they? How long will it take for word to get around that the IRS has a very limited ability to collect any "Obamacare" tax penalties? The IRS can only collect the individual mandate tax if the taxpayer has a refund on that year’s return. Taxpayers can perpetually avoid paying the individual mandate tax so long as they are careful to not overpay their annual withholding.

This California chart represents the reality of “Obamacare” and I expect it will be quite a shock to lots of people who actually get into the nitty-gritty of what they will get for the cost.


Recent Post:
Is There Rate Shock? You Bet
So If the Maryland Health Insurance Rates Are So Cheap Why Did I Get This Postcard From Maryland Blue Cross?

Posted by ROBERT LASZEWSKI at 3:29 PM