The Society of Actuaries is out with another estimate of health insurance rate increases as a result of implementation of the Affordable Care Act ("Obamacare").

While there is a great deal of difference between states, they are estimating an average increase of 31.5% on account of the new underwriting reform and benefit expansion requirements of the health law: 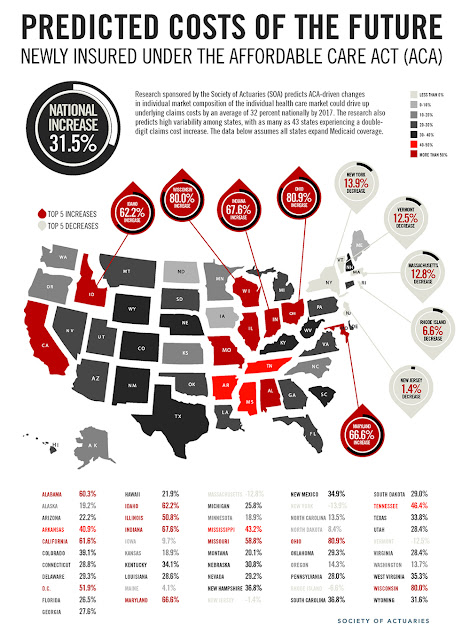 These rate increase projections by the Society do not include the big jumps that are coming for younger people driven by the laws requirement that age bands be narrowed so that older people pay no more than three times the premiums of the youngest. The combination of these baseline increases will about double the cost of health insurance for those in their 20s and early 30s––and perhaps decrease costs for those in their late 50s and 60s––in the majority of states that haven't already narrowed these age-related costs.

On this blog back in December, I predicted the same thing given the industry conversations I was having with those inside the companies tasked with calculating the new rates:


On average, expect a 30% to 40% increase in the baseline cost of individual health insurance to account for the new premium taxes, reinsurance costs, benefit mandate increases, and underwriting reforms. Those increases can come in the form of outright price increases or bigger deductibles and co-pays.

At that time, I also pointed out that such increases would be way more than was first estimated when the law passed the Congress:


In a November 2009 report, the CBO estimated that premiums in the individual market would increase 10% to 13% on account of the health insurance requirements in the ACA. In the under 50-employee small group market, the CBO estimated that premiums would increase by 1% to a decrease of just 2% compared to what they would have been without the ACA. All of these differences in premium would be before income based federal subsidies are applied to anyone's premiums.

Defenders of the Affordable Care Act, including the administration, have been quick to point out that these increases won't be felt by those receiving premium subsidies––likely 60% of consumers.

But, most of the cost of the Affordable Care Act is the cost of the coming health insurance subsidies––the Medicaid expansion is the other big part. So the federal government, that will pay the excess premium on account of those getting subsidies, will feel the impact of these big rate increases. Santa Claus is not going to be paying these higher subsidized premiums––federal taxpayers will be. Given that the CBO initially said the increase would only be about a third of what is coming, I have to question the original cost estimate for the new law.

That said, the 40% of consumers who will not be eligible for subsides are going to see some very high prices. Existing individual and small group customers, particularly those not in "grandfathered" plans are going to be shocked by what will happen to their premiums come January 1 in the vast majority of states.

The law also allows insurers to surcharge smokers' premiums by another 50%.

It is interesting to watch the most strident of the new law's supporters trying to spin the growing and overwhelming evidence of what is coming. The spin ends on October 1 when the promised new health insurance exchanges are scheduled to launch with the new health insurance offerings and their prices.

Readers of this blog likely saw my other post this week calling attention to a survey of health insurance industry insiders working with the new exchanges exhibiting little confidence the exchanges will launch smoothly.

"Obamacare" supporters in denial had better get ready for reality.

This is all shaping up to be a tough launch.

I told them not to call if the Affordable Care Act.

Posted by ROBERT LASZEWSKI at 12:25 PM