By killing the cost sharing reduction (CSR) subsidies has Trump stopped what he has called an "insurance company bailout"? Or, has he created an unfunded mandate?

The Obamacare statute requires the health plans to provide cost sharing reduction subsidies to reduce the deductibles and co-pays in the Obamacare compliant individual health insurance market for those who make less than 250% of the federal poverty level. It is a mandate. Funding a mandate is not a bailout. In Washington, DC we call failing to fund a mandate an unfunded mandate.
The low income people eligible for these subsidies won't be hurt by Trump's action––they still get their cost sharing reduction benefits and any increase in their premiums charged by the insurers as a result of Trump's action will generally get absorbed by their federally provided premium subsidies.

But people in the individual health insurance market who make too much to get a subsidy––$48,000 a year for a single person and $98,000 a year for a family of four––have to pay the full premium including the bigger rate increases Trump's action creates. Ironically, it is the middle class stuck in the Obamacare market that Trump is hurting by killing the CSRs. The CBO has estimated that Trump's action will on average increase the cost of a Silver Plan (which is eligible for the CSRs) by 20% with other plans going up "a few percent."

How many people buy Obamacare compliant policies and don't get a subsidy for their out-of-pocket costs and their premiums?

According to the Kaiser Family Foundation 6.7 million people out of a total of 15.4 million in the Obamacare compliant individual health market do not get any kind of subsidy. That is 44% of the total market. 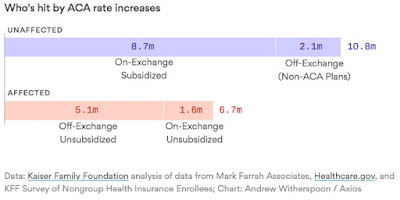 I don't see any evidence that Trump understands who he is hurting. Particularly when he argues he's just ending an "insurance company bailout."

He isn't hurting the low-income people––by law they will get the CSRs while the additional premium cost that occurs when he fails to pay the insurers for them just gets picked up by Obamacare's premium subsidy system that caps people's out of pocket maximum premium.

He isn't even hurting the insurance companies in the long-run by sticking them with this now unfunded mandate. Yes, they will take a big hit because they aren't getting their CSR payments in October, November, and December to cover a benefit they are mandated to provide. But almost all of them can afford to just bridge themselves into 2018 where they'll just ultimately raise the rates to cover the cost of providing the CSRs.

He's really only hurting the middle class stuck in Obamacare, many of whom came to his campaign rallies complaining of the extraordinarily high cost of their individual health insurance and wanting Trump to do something about it.

He has. He just caused their rates to go up even higher.
Posted by ROBERT LASZEWSKI at 10:33 PM