After last year's 4% rate increase, California's Obamacare insurance exchange rates appear to be catching up to the rest of the country.

The two biggest carriers are raising rates by much more than the average 13.2% increase. Blue Shield said its average increase was 19.9% and Anthem said it would increase rates an average of 17.2%

According to the LA Times, Covered California officials blamed the big increase on the "rising costs of medical care, including specialty drugs, and the end of the mechanism that held down rates for the first three years of Obamacare."

Well, once again when it comes to Covered California's explanations, not exactly.

On the argument blaming the rising cost of care, in late May Milliman published its Milliman Medical Index indicating that baseline medical cost trend was up 4.7% year-over-year––the lowest annual increase since Milliman first measured cost trend in 2001. And, of course, this 4.7% increase included the cost of specialty drug costs.
On the argument blaming the mechanism that held down rates the first three years coming to an end, what Covered California didn't mention was that the Congress also suspended the health insurance tax under Obamacare for 2017––an action that about offset the end of the reinsurance program for insurers.

California did have a much lower Obamacare rate increase last year when compared to many other parts of the country. But one of the things I have learned over the years is that it is not uncommon for one insurance company or one market to see better claims experience than others only to have it all come back to average in due course.

California actuaries that I have talked to never doubted that this would ultimately be the case here. They pointed to three things that only delayed the inevitable. First, Covered California canceled 1 million pre-Obamacare policies unlike most states that grandfathered them for a time in the face of the "you can keep your health insurance if you like it" blow back in 2014. Second, the actuaries tell me that California insurers tended to go out for bigger 2014 rate increases than many other parts of the country and, third, almost immediately went to much smaller networks when Obamacare first launched. The combination of these things gave California some room to skate the first two years.

Covered California is also arguing that their regulation has kept the average health plan profit to only 1.5%. That is significant because carriers tend to price for at least a 5% profit in this historically problematic individual health market.

That profits are only priced to be at a 1.5% margin tells me there will be more upward rate pressure next year when the carriers price for 2018 claims and will ultimately need to get back to acceptable margins.

I am sure that Covered California will now be telling us that consumers can escape these increases by shopping for a lower cost plan.

If fact, I went onto Covered California and downloaded the 2016 cost of a plan for a family of four (mom and dad age-40 in Compton) and found that Anthem and Blue Shield were already among the highest cost plans while the plans most identified as Medicaid-like––Molina, Health Net, and LA Care––were the cheapest: 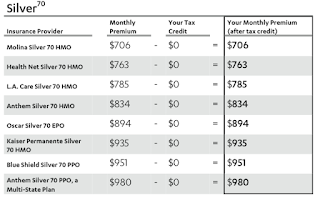 They will also tell us that most people get subsidies. Yes, on the exchange. But about half the market doesn't get a subsidy when the on and off exchange individual market is taken into consideration. The people who aren't subsidized take the full hit for these big rate increases.

See my post at Forbes on what supporters were saying a year ago about Covered California being the model for Obamacare's long-term success.

Posted by ROBERT LASZEWSKI at 5:10 PM