I thought the history of New York's increases was interesting.
For 2015, the exchange health plans asked for an average increase of 12.5%. The New York Insurance Department approved an average 5.7% increase.

Here are the requested and approved rate increases for 2016 (from Charles Gaba): 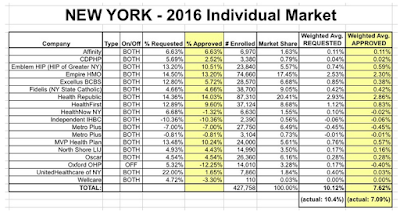 Here are the 2017 requested rate increases (asterisk means the company offers on the state exchange) recently announced by the New York Insurance Department: 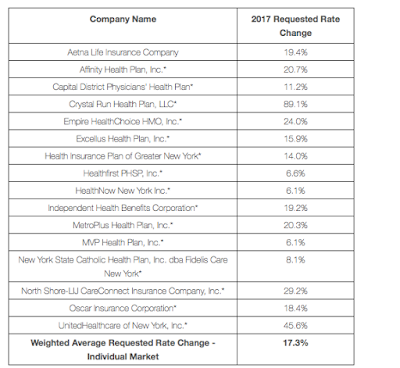 I suggest looking at the biggest market share carriers and noting the consecutive rate increases they requested. The "weighted average" also attempts to factor market share in.

A lot of people will say this is not a big deal because the vast majority of consumers buying Obamacare individual market health insurance policies get a subsidy and are therefore protected from these big increases.

For 2017, they estimate that, both on and off the exchanges, 12 million will get a subsidy and 12 million won't: 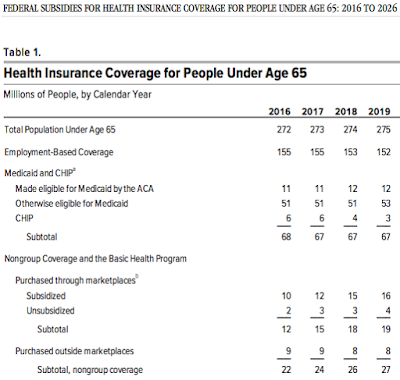 So, lots of people pay the full premium for these plans because they do not qualify for a subsidy.

Using eHealth, I found that the cheapest unsubsidized 2016 Obamacare qualified health plan (QHP) offered to a single person, age 40, in Syracuse (Zip 13290), New York was this one:

For a family of four with mom and dad age 40, the cheapest plan was this one:

Proponents of Obamacare will point to rate increases lower than New York's average of 17.3% and argue that consumers can lower their costs by switching carriers. For example, they might point to MVP's average increase of 6.1%.

But MVP is the health insurer above. After that 6.1% average increase they are still charging this family $1,158.10 a month--$13,897.20 a year for the cheapest Silver Plan available in this market!!
Posted by ROBERT LASZEWSKI at 2:23 PM