Why the Obamacare 2016 Open Enrollment Stalled: The Big Unwritten Story About Obamacare––How Unaffordable It Is For the Working and Middle Class

Back on December 22nd when the President triumphantly announced 6 million enrollments on HealthCare.gov and the administration pointed to "unprecedented demand" on the exchanges, I was the skunk at the garden party arguing in the Washington Post that it was all just churn as existing customers were only trying to escape all of the big rate increases.

Well guess what? It was all churn.

The administration will shortly announce the total number of people who signed up for Obamacare under the Affordable Care Act.

The number signing up in 2016 will turn out to be not much more than the number who signed up last year after those who don't pay are netted out––no sizeable gain in enrollment has been accomplished on a national basis. [February 4 Update: The increase was 8.5% over 2015.]
Why Obamacare's Enrollment Stalled in 2016

Those touting Obamacare often brag about how affordable it is.

According to the White House Website, "Many Americans can get a [health insurance] plan for less than $100 a month."

That's all true if you are poor. Obamacare has been very helpful to those on Medicaid and those with the lowest incomes on the insurance exchanges.

But if you are solidly in the working and middle-class in this country individual health insurance on the state and federal exchanges is anything but affordable. 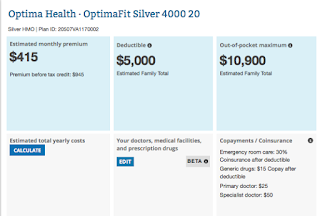 But, if this family bought the lowest cost Silver Plan available to them in Roanoke Virginia the premium would be $394 a year and they'd have a $4,400 deductible. The lowest cost Bronze plan would have a premium of only $186 a month for the family of four––but would have a deductible of $12,900 for both the individual and the family.

But the story that never gets written is the one about middle class people who are not eligible for a subsidy.

Remember, Obamacare is a monopoly––people in the individual health insurance market can only buy Obamacare compliant policies.

I went to HealthCare.gov and entered a family of four, with mom and dad age-40, making enough money not to be subsidy eligible, and living in three other smaller cites of modest health care costs.

Here is what I found were the cheapest Bronze and Silver plans available to them: 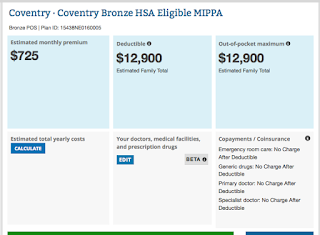 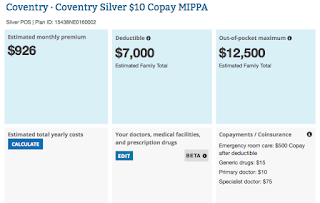 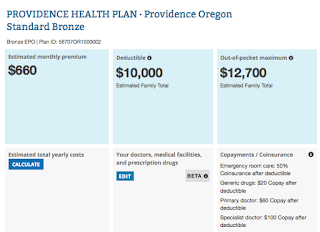 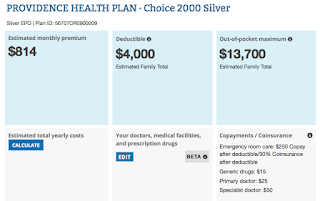 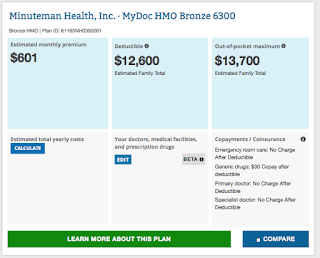 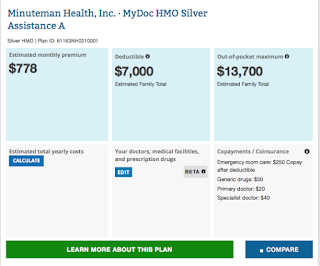 I readily admit I picked these four cities out of the air. But these were the only four I picked.

I encourage you to go to HealthCare.gov and click on, "Want To Preview Plans Before You Start" which enables you to pick any zip code and family description to easily see what's available. Look for yourself.

After you have read this post, and done your own examination, please tell me how the Affordable Care Act is affordable.

At that point, neither you nor I should be surprised that Obamacare's enrollment has stalled out.

The Obamacare product just isn't worth buying if you have to pay anything more than a poor person has to pay for it. Or, if you are sick and will easily make your money back.

Most insurance companies are losing money today under Obamacare because not enough healthy people have signed up. They were hoping that the 2016 enrollment would change that.

This can't continue.
Posted by ROBERT LASZEWSKI at 1:46 PM