Here is what President Obama said in a recent video, "The Affordable Care Act is working. It's working a little better than we expected."

On Tuesday, the administration announced that 11.4 million people signed up for Obamacare in the second open enrollment.

That number is higher than the number that will ultimately pay for their coverage and complete the enrollment. Even after they complete signing up the stragglers, it is more likely the paid for number will be about 10.5 million based upon a number of conversations I have had with carriers.

But let's assume they end up with as many as 11 million people. Would that exceed expectations?

Here is what the Congressional Budget Office projected in May of 2013: 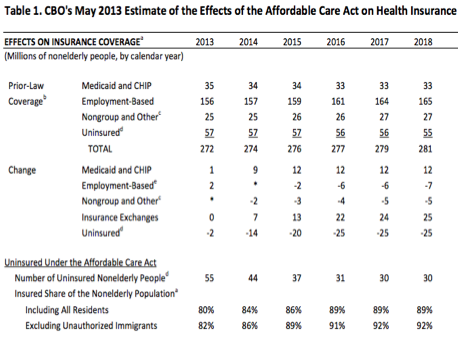 As you can see, the CBO estimated back in 2013 that there would be an average of 13 million people in the insurance exchanges during 2015.

Perhaps most importantly, I would call your attention to the CBOs original enrollment projection for 2016––that 22 million people would be in the Obamacare insurance exchanges.

Do you think the administration will make the original expectation of 22 million enrollments during 2016? They enrolled 6.7 million by the end of 2014, and will likely have about 9 million at the end of 2015 if this year plays out like last year.

Why does this matter?
Because we went through all of the trouble of seeing the Affordable Care Act become law in order to reduce the number of those uninsured in this country.

Looking at the Obamacare results to date, how many people do you think will still be uninsured in 2016 compared to the CBOs original expectations?

It also matters financially––only about half of the subsidy eligible people appear to have so far signed up bringing into question the rates health plans will have to charge when the underwriting subsidies end in 2017.

Back Room Problems Persist
The original expectations for Obamacare extend beyond the enrollment.

The administration spent $2.2 billion on developing and fixing Healthcare.gov.

But 17 months after its original launch––and five years after the law passed––the backroom still has not been completely built.

There are now about 7 million people receiving health insurance premium subsidies in the federally run exchanges. But HealthCare.gov can't pay the insurance companies. Insurers are still getting paid based upon a workaround that involves them manually filling out worksheets––for 7 million people. There is no formal date for when this will be fixed.

This lack of an automated enrollment process not only causes lots of headaches but also makes the enrollment numbers the administration is reporting awfully soft. One carrier told me they only ended up with half of the net January enrollments HealthCare.gov originally reported to them.

So, has Obamacare met your expectations?
Posted by ROBERT LASZEWSKI at 3:31 PM