How Many People Have Enrolled So Far in Obamacare's Second Open Enrollment?

Undoubtedly I will hear that question many times in the coming weeks.

The answer is that this enrollment process is so screwed up we will have no earthly idea how many new people have enrolled and how many 2014 enrollees remained on the program until at least April 2015.

Let me try to illustrate.

Let's say George is now enrolled in Obamacare. He is happy to have subsidized and guaranteed health insurance for the first time. He was even been happier to read in the media that the second year Obamacare rate increases would be small.

He was also happy to get a letter just before the Election Day telling him he will be automatically renewed in his current plan.

Then on December 6th George gets his January premium statement. He is paying a lot more! What happened? His insurance company phone lines are suddenly jammed. Seems like a lot of other people got a surprise.

Turns out all of those expert analysts and reporters writing stories about "average rate increases" never heard of the term loaded average––that's when the plan that got 70% market share increased their rates 15% and the rest cut their rates or gave tiny increases.

That is happening a lot in Obamacare this renewal season. Here is a sample list of the rate increases the biggest market share carriers are asking for: 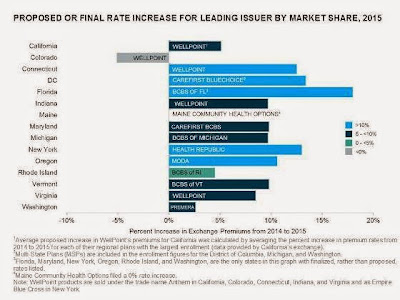 This is all compounded by something called the baseline Silver Plan's effect on subsidies. The second lowest cost Silver plan in any market determines what a person's subsidy will be. Last year, that plan was probably the plan that got the biggest enrollment and also the plan with the biggest rate increase this year. So, it's probably the plan George has.

In fact, you might recall a recent briefing paper by actuarial firm Milliman in which they pointed out that even a modest increase in premium by market leaders of 5% could lead to net after subsidy cost increases of 30% to near 100% for subsidized enrollees.

But because George's plan is no longer the baseline plan, even though George is on subsidy and he is supposed to be shielded from any rate increase by the taxpayer, his premium is going up unless he changes to the insurance company that now holds the honors as having the second lowest cost Silver Plan.

So, George scrambles, in the very few days between his getting his January premium invoice (likely about December 6th) and the January 1 cut-off for open enrollment on December 15, to sign-up for that lower cost plan and save his full subsidy.

But then George's friend Mary tells him that the new second lowest cost Silver Plan is one of those terrible narrow network plans that restricts providers in order to be able to charge the lowest rate and suggests he sign up for a third plan that costs a little more but has his doctor in the network.

So, how many enrollments will the Obama administration and the insurance companies be counting here on their far from finished Obamacare backroom system?

George's first carrier will count him because it was too much bother for George to figure out whom to call to cancel his coverage––he will just not pay the bill. But his carrier, by regulation, can't knock him off the rolls for three months––not until April 1.

George enrolled in his second choice but never bothered to pay that bill but the carrier will count him likely into February as the health plans give people plenty of time to pay their bill in what will be a very confusing situation.

And, of course, George's third carrier will count him.

So, that is one person being counted three times and we won't have just George's status cleared up until George's 2014 carrier can delete him from its rolls in April.

So, how many people have enrolled in Obamacare say, by December 1, or December 15, or January 1, or February 1?

I will have no frickin idea, don't even ask.

So much for Healthcare.Gov working really well.

But I am sure the Obama administration will be telling us the website, call centers, and carriers are very busy with people all excited about Obamacare. They just won't be defining excitement.
Posted by ROBERT LASZEWSKI at 9:02 AM