That problem could be exacerbated by the choices policymakers make on the issue of age rating bands. On the one hand, community rating (everyone pays the same price) would be ideal. After all, that is effectively what every member of an employer plan benefits from.

But to get the younger people in the pool--particularly in the face of mandate penalties that are all but evaporating in the Democratic proposals--the premiums younger folks would pay need to be attractive. That is without driving the costs up to prohibitive levels for older Americans.

With the Baucus proposal all but gutting the penalties for not buying insurance and without affordable premiums for everyone, it is hard to see how enough young and/or healthy people could be attracted in order for there to be a workable insurance pool.

"Urban Institute researchers used their Health Insurance Policy Simulation Model to calculate the financial implications of age-based premiums under three different scenarios. They found that regardless of the rating option, there would be little difference in overall health insurance coverage or total spending. However, the affordability of health care costs (premiums plus out-of-pocket expenses after any government subsidy) will be strongly related to the age-based premium rating.

"For example, a 55- to 64-year-old buying a nongroup policy but ineligible for a low-income subsidy would face average medical costs topping $10,600 under 5:1 age rating, but about $7,400 under 2:1 rating. Medical costs would be about $5,500 under pure community rating (1:1), where premium prices would be the same regardless of an applicant’s age.

"For many older adults and older families, the higher out-of-pocket costs that come with greater medical use in older age, combined with higher premiums due to a steep age rating (such as 5:1), would lead to a high burden of health care costs relative to income."

Here is a chart outlining their key findings. They compare estimated premiums by age level using some of the various age band options being considered (H.R. 3200). The Baucus bill currently has a 4:1 age band structure: 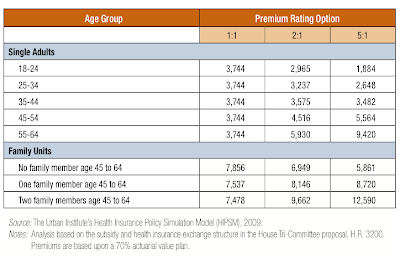 So, in a community-rated program everyone would pay the same premium. That would be great for older people but very expensive for those in their 20s. But to get a single adult premium for a 20-year-old down to $1,884 a 60-year-old would have to pay $9,420 each year under the 5:1 scenario!

Consider this against the current Baucus proposal that would fine each uncovered adult nothing in the first year of the program and never more than $750 in the out years.

Then factor in the limits on how much premium subsidy families and individuals would get-- under the House bill for example.

The Democrats appear to be headed toward a health care bill with subsidies very much like these while also gutting the individual mandate.

"So, let's see, our family making $66,000 a year can either pay $6,600 a year for health insurance or pay no fine at all in 2013, or a $200 per adult fine in 2014, but still have the right to apply for insurance without a concern for medical underwriting or pre-existing conditions whenever we get sick."

Americans will make a real simple calculation: "At what point can I make money on this deal."

That could be a disaster for the creation of a workable insurance pool!
Posted by ROBERT LASZEWSKI at 11:04 AM