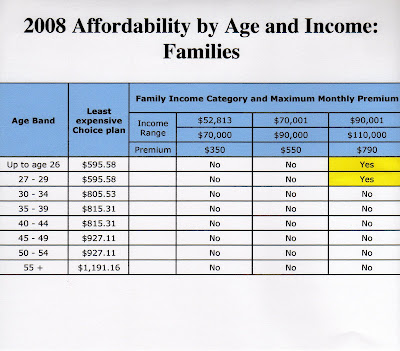 That was the conclusion in a recent New York Times editorial, not to mention the growing spin coming out of Massachusetts, regarding the state's new health plan.

As I have said before on this blog:
In an earlier post I called the Massachusetts health reform program an incomplete result for an unsustainable cost.

Beyond the controversy for just how much this plan will cost in the second full year--most defenders say $869 million even though the Governor has already told Wall Street it could well be more like $1.1 billion--there are two things that bother my about the Mass health plan's costs:
On that second point, I have posted the state agency's (The Connector's) own affordability chart for families. The state uses this chart to tell families which of them are exempt from the state's mandate to buy health insurance because the policies offered by the program are by their definition (as well as by common sense) unaffordable.

I know the political season is underway and Barack Obama's health plan is pretty much the same as the Mass plan. For that reason, partisans have to spin the Mass plan as a great success or see their candidate suffer.

But look at the chart. A family making $110,000 a year, with the parents over the age of 29, would not be able to afford any of the health insurance plans offered by the program--and that's The Connector's conclusion.

The Connector's chart tells a story--the Mass health plan is unaffordable for the very people it was designed to help--those between public program eligibility and enough income to have taken care of themselves in the first place.

Until Massachusetts is ready to deal with that reality head-on the Massachusetts Health Insurance Law is not a solution––it is an incomplete result for an unsustainable cost.

Comprehensive Health Care Reform and Massachusetts--Are We On Our Way To a Very Different Debate?
Posted by ROBERT LASZEWSKI at 12:30 PM